UPDATE. The Kitschies were announced today (18 Jan 2013), and both Redemption in Indigo and The City’s Son have been nominated in the best debut novel category! Congrats to all the nominees, and thanks to the members of the jury!

This week’s giveaway will be Redemption in Indigo (paperback) 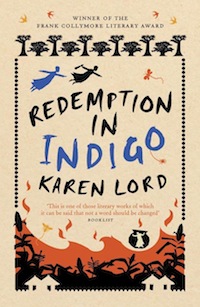 plus another Jo Fletcher book:

Expelled from school, betrayed by her best friend and virtually ignored by her dad, who’s never recovered from the death of her mum, Beth Bradley retreats to the sanctuary of the streets, looking for a new home. What she finds is Filius Viae, the ragged and cocky crown prince of London, who opens her eyes to the place she’s never truly seen.

But the hidden London is on the brink of destruction. Reach, the King of the Cranes, is a malign god of demolition, and he wants Filius dead. In the absence of the Lady of the Streets, Filius’ goddess mother, Beth rouses Filius to raise an alleyway army, to reclaim London’s skyscraper throne for the mother he’s never known. Beth has almost forgotten her old life – until her best friend and her father come searching for her, and she must choose between the streets and the life she left behind.

You have a week to comment on this post. Tell me which Jo Fletcher Books or non-SF Quercus titles you’re looking forward to reading in 2013. If you wish, add your twitter name, tumblr or blog url. Next Wednesday night (around 8pm GMT-4), I’ll choose a winner from the comments. I’ll announce the name next Thursday when I post about the new giveaway.

11 thoughts on “The City’s Son and Redemption in Indigo”