So, I’ve been sitting on a secret for almost a week now, and today it was officially announced:

Karen Lord has been named the winner of the 2011 William L. Crawford Award for her first novel Redemption in Indigo (Small Beer Press). The award, presented annually at The International Conference on the Fantastic in the Arts, is for a new fantasy writer whose first book appeared in the previous year. This year’s conference will be held March 16-20, 2010 in Orlando FL.

I was speechless then and I’m not much more eloquent now, so bear with me.

First of all, thank you so much to the award committee. The qualifications and experience of the judges, the calibre of the other authors they shortlisted and recommended, and the absolutely stunning list of previous award winners … all of that makes me awed and very very grateful.

And I can’t help but thank my publishers Small Beer Press (not for the first time, and definitely not for the last time).  I think they might have one of the highest awards:titles ratio out of all publishers of speculative fiction – a small press that punches in the heavyweight division.

I thought I would take tons of photos and be all over twitter.  It didn’t happen.  Part of that was the rain, part was my own constant motion, hands full, from place to place. There was neither time nor opportunity to pause with a camera or a Touch to capture the moment.

Fortunately, others were present to do some capturing for me, so here we go.  You can click on the photos for larger versions.

I arrived Thursday night, did some initial scouting and learning the subway system in the early part of Friday, and then prepared for my first event, the reading at McNally Jackson Books.  Unfortunately I managed to get a migraine a few hours before (sparkling blind spots, nausea and icepick-sharp pain), but fortunately, having it hit a few hours before meant that my sight was fully restored by the time I had to read.

The staff at McNally Jackson were fantastic.  I don’t think I told them I was under the weather, but they took such good care of me that it didn’t matter.  Kate Milford and Dustin Kurtz were warm and welcoming (and also memorable because I met them again at the Book Festival!), but I must also mention the gentleman downstairs with whom I discussed adrenaline, martial arts and life, and the blond young man at the cash register who chatted with me so pleasantly when I first arrived and was still feeling woozy.  I’m sorry I didn’t get/remember your names!  I’m better at this kind of thing when I don’t have a migraine.

Meeting Julia Holmes was another high point of that evening.  I think I was expecting someone very serious, intense and literary, but she’s relaxed and has a great sense of humour and lots of warm generosity.  I’m so glad to be sharing this debut experience with her!  There’s an unselfconscious depth and wisdom to her writing, serious literary fiction with a delicate but indelible touch.  Her book is called Meeks, and you should check it out and its marvellous reviews at the New York Times Book Review and more.

Saturday was spent quietly, recovering from the migraine (they take about three days to disappear completely, and until then sneezing is no fun, let me tell you).  Sunday morning I made my way down to Brooklyn Borough Hall without incident, and easily found the stall where Small Beer Press was set up.  And now I have a picture, thanks to the Los Angeles Times:

That’s Michael DeLuca and Gavin Grant on either side of an extremely short individual.  Michael is the beer specialist at Small Beer Press (of course they have a beer specialist!) and Gavin is co-founder of Small Beer Press (along with his wife, award-winning author Kelly Link) and my very own editor.  I don’t mean to sound like I’m in permanent gush-mode, but they are genuinely lovely people, and being a Small Beer Press author confers a certain cachet in both literary and genre circles.  Hence my slightly smug smile.

Lots of friendly people came by the stall in spite of the rain.  One gentleman persuaded me to be interviewed under an umbrella:

I met Elizabeth Nunez, who I first saw in Barbados, and got her latest novel Anna In-Between.  I also met K. Tempest Bradford and N. K. Jemisin, who are both extremely cool.  You should already know about N. K. Jemisin’s amazing fantasy novel The Hundred Thousand Kingdoms, and if you don’t, you need to rectify that immediately.  Do I have pictures of these meetings?  Of course not.  You try holding an umbrella, three bags and a camera in the rain and see where that gets you. 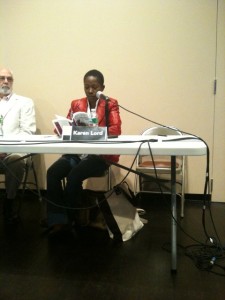 The panel went well.  Bill Evans, N. K. Jemisin and I terrorised the audience with visions of what happens when supernatural beings and nature (and sometimes both together) get out of control.  Bill Evans is a meteorologist writing about extreme weather in New York and the fact that two tornadoes occurred days later in the same area wasn’t surreal at all.

Here I am (photo courtesy of my cousin), being all terrorising.

The rain increased and large pools of water began to form alarmingly in the blue folds of our stall’s canopy, threatening to go gloosh onto the vulnerable books below. I went to Kate Milford’s panel and met a few more book-reading and bookstore-running people, but soon it was time to call it a day.  If only it had been sunny and warm!  But it was still exciting, and the die-hard book lovers would not be denied. 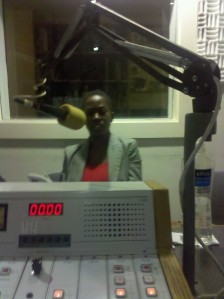 I went to Wall Street in the late afternoon to record with Jim Freund of Hour of the Wolf on WBAI.  This was brilliant on several levels.  First, Jim Freund is epically cool (no, I am not in gush-mode, will you shut up?).  The list of people in sci-fi and fantasy that he has interviewed gives me glee.  Second, the programme airs on Saturdays at 5am, but because this was a prerecording for a future slot (to be determined – I’ll be sure to let you know when the air date is confirmed), I avoided the military-style early rising.  Jim is so easy to talk to that I quite forgot that there were microphones and recording devices around.  Eek!

Here’s a photo of the occasion, nicked from his Twitter.

My final reading took place at Greenlight Bookstore in the evening.  What a difference no migraine makes!  I was able to make eye contact with the audience without feeling blurred and off-kilter.  Julia’s reading really captured my attention (was I too wrapped up in a personal universe of pain to appreciate it on Friday?) … sensual, musical, pleasing to the ear and the imagination.  I also got to meet her editor, Jedidiah Berry of Small Beer Press, who is also an award-winning author and, yes, also very cool (I’m not sucking-up; he’s not my editor after all).

All in all, it was grand.  I wanted to sleep for a day straight when I got back home.  But it must have been inspiring, because I am once more bending my brain cells to the agent-search and selection process, adding about 2 000 words to The Best of All Possible Worlds (wrote more than 1 500 yesterday alone – rare!), and even writing up this post like a dutiful student reporting on a field trip!